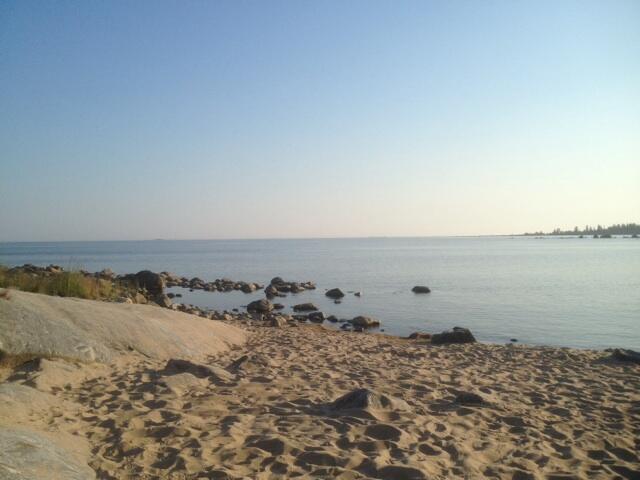 My favorite beach on the island of Obbola (where I live). It’s called “Vitskärsudden.”

I’ve been a bit slow updating this blog lately, since I unexpectedly got myself a full time job for a couple weeks. A very welcome development, I was very much delighted! Also, summer finally came to Umeå, and I’m enjoying it as much as I possibly can! 🙂

Anyway–it’s only 18 days left now until we board that plane to New York… and needless to say it feels totally surreal!!! In fact, it feels even weirder since we finished all the booking just a couple weeks ago, and haven’t spent any time at all checking for flights and hotel, it’s like the trip is a fantasy that will never happen for real! I guess things won’t really sink in until we’re actually in our seats on that plane, and the captain says “Ladies and gentlemen, welcome onboard…”

From now on, I’ll try to update on a more regular schedule, and from the day we set out, my goal is to update at least once on a daily basis (depending of course on the Internet availability!)

Anyway–underneath the cut is our now complete schedule (will include it in the “about this blog” section as well):

August 4:
Checking out from the Carter Hotel.
11:20 am: Departure from New York (La Guardia) with American Airlines to Chicago (O’Hare).
12:50 pm: Arrival at O’Hare, Chicago.
Road trip to Henderson, Kentucky.
Checking in at the Holiday Inn Express, Henderson, Kentucky.

August 7:
Checking out from the Holiday Inn. Road trip back to Chicago.
Checking in at the Howard Johnson Inn and Suites Elk Grove Village, Chicago.

August 14:
Checking out from the Hotel Indigo, Ottawa Downtown City Centre.
08:32 am: Departure from Ottawa via VIA Rail.
12:49 pm: Arrival in Toronto.
Checking in at the Toronto Marriott Bloor Yorkville Hotel.

August 18
Checking out from the Toronto Marriott Bloor Yorkville Hotel.
Departure from Toronto to New York (La Guardia) at 3:59 pm.
Checking in at the Carter Hotel, New York.

August 19:
Checking out from the Carter Hotel.
Departure from New York (JFK) with Norwegian Airlines at 9:30 pm to Oslo, Norway.